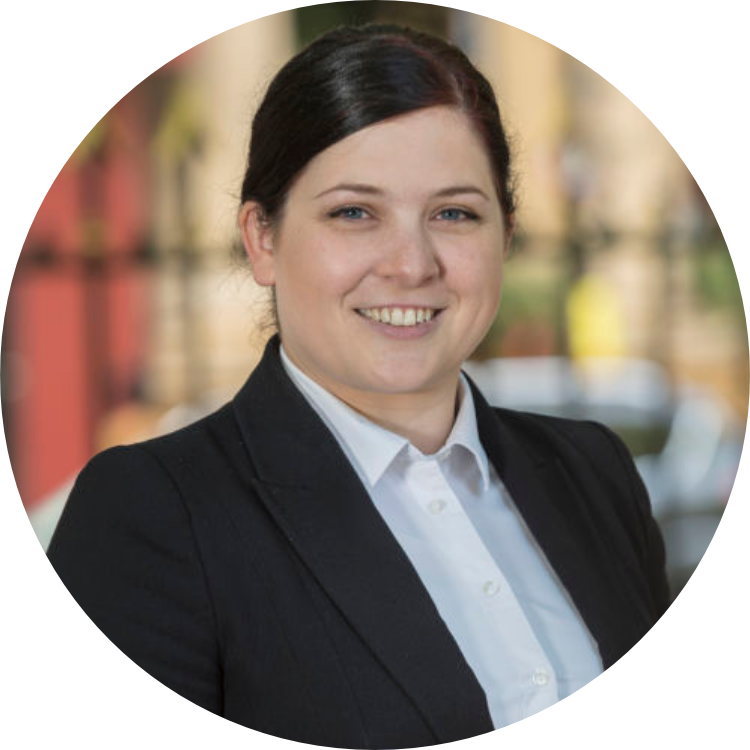 Rebecca was called to the Bar in 2010 having completed the Bar Vocational Course at the College of Law (now the University of Law). She has been a Fellow of the Chartered Institute of Legal Executives and cross-qualified to be a solicitor. After successfully completing the Higher Rights Examinations in both Criminal and Civil Law she was successful in obtaining a full exemption from pupillage due to her qualifications and level of experience.

She completed a Masters of Laws degree and the Legal Practice Course with Masters of Science part-time whilst working in full-time roles and achieved a distinction in both.

Between 2010 and 2014 Rebecca worked as a self-employed advocate appearing before District and Circuit Judges daily in a wide range of civil matters. In September 2014 she moved to an in-house advocacy department of a nationwide solicitors firm focusing on personal injury matters and contractual disputes. She undertook hearings in person and via telephone and prepared advices on quantum and liability.

Having moved firms, Rebecca then worked as a case handler and performed advocacy as and when required by the firm on both her files and those of other case handlers. She therefore fully understands the expectations of her professional and lay clients and has gained a reputation for exceeding those expectations.

She has particular interest in contractual disputes and property matters, including landlord and tenant.

Rebecca has experience in TOLATA claims, both as an advocate and when she was a case handler. Rebecca is keen to take instructions in these matters and her experience of family law enables her to take a comprehensive and sensitive approach to cases at the intersection of civil and family law.

In this matter, Rebecca represented the claimant, who brought a claim via a litigation friend due to having lost capacity and the Defendants were litigators-in-person, one of whom required an interpreter.

This was a claim in trespass and further concerned a counter claim on the basis a property was a gift or, in the alternative, an interest had vested in the Defendants by way of a common intention constructive trust.

In addition,  there was little documentation to provide strong evidence in support of the position of either side and Rebecca’s client’s lack of capacity posed an obvious issue in respect of rebutting the oral evidence of the Defendants regarding conversations and promises that took place in support of the counter claim. There was, however, a significant amount of indicative evidence that required linking together to create the true picture for the Court, which Rebecca was able to do both within the cross-examination, closing submissions and skeleton argument.

All parties and witnesses were close relatives and friction had existed for at least 20 years. Rebecca had to utilise her experience and skill to ensure the emotions within the proceedings were not detrimental to the Claimant’s case. She cross-examined the Defendants for a significant period which involved cross-referencing a large number of documents to raise the relevant inconsistencies.

Rebecca was entirely successful in the claim and the counter claim was dismissed in full. The Court wished to provide time to the Defendants but Rebecca reminded the Court of the relevant authorities and that, in a trespass case, the order for possession must be forthwith.

Rebecca further secured an order for payment on account of costs of £40, 000.

Having successfully represented the Claimant before the District Judge, Rebecca was further instructed for the Respondent in the appeal. Rebecca prepared and produced a detailed skeleton argument and persuaded the Judge that it was correct and proper for the Judge at first instance to have insisted on 1-day rates in the circumstances of this case and, as no evidence of those rates was provided, the Court had no option but to award the credit hire rates, relying on the following case law:

The appeal was therefore dismissed.

This matter concerned an unusual property dispute whereby the lessees of a block of flats came to an agreement with the freeholder that they would manage the property as the freeholder was failing to do so. There were only 5 flats let at the time.

This did not follow the usual process for creating a Residents’ Management Company or the Right to Manage process under the Commonhold and Leasehold Reform Act 2002. Instead the lessees were assuming responsibility by consent with no formal change in the responsibilities under the leases. There was then an oral agreement reached between the parties with regard to what payments, if any, would be made by the freeholder in respect of the unoccupied flats. It was failure to pay the amounts due for the unoccupied flats that gave rise to this claim by the lessees.

The Appellant freeholder appealed the District Judge’s decision, accepting the findings of fact about the agreement could not be challenged, but averring that the agreement would amount to a variation of the leases and being oral in nature was unenforceable.

Rebecca was instructed for the Respondent lessees in the appeal. Rebecca prepared and produced a detailed skeleton argument and persuaded the Judge that the Appellant had, in essence, jumped a step: on the findings of fact of the lower court it must be found that this agreement was external to the leases and therefore did not amount to a variation. This was essential as it would have to be conceded that a variation to a lease of this nature would have to be in writing. The Judge concluded that the agreement was secondary and not a variation and as such dismissed the appeal.

E Estate Agents Ltd v NT 2022
Rebecca represent NT in a claim by estate agents for unpaid commission following the sale of a house on a direct access basis. NT had previously claimed against the Estate Agents in negligence and represented himself. There was then a second claim which the estate agents alleged was in the personal name of the director and was on a different basis. Using documents drafted by Rebecca, NT applied to strike out this claim/enter summary judgment on the basis it was an abuse of process and/or there was no real prospects of success. Rebecca prepared a skeleton argument which was highly commended by the Judge. She referring to the previous claims, the requirements under the consumer regulations, and the requirements under the Estate Agents Act 1979. Rebecca was successful on all arguments and the claim was struck out. Costs were awarded as claimed.

Rebecca has extensive experience in TOLATA claims including final multi-track trials, both as an advocate and when she was a case handler.

Rebecca is keen to take instructions in these matters and her previous experience of family law enables her to take a comprehensive and sensitive approach to cases at the intersection of civil and family law.

Rebecca has undergone extensive training and is accepting instructions on court of protection matters.

“Thank you so very much for all your support this morning … you made the whole process easier to cope with.” (2022)

“Thank you very much for your effort and skill yesterday in resolving the case and avoiding me having to answer any questions”. (2021)

“…thank you for explaining the order you have been very helpful throughout. I now understand how all the figures were worked out and comes to the final amount.
We once again appreciate your time throughout and I am happy for you to close the case. Although we are disappointed we couldn’t prove to the judge what they have done, I was impressed on how you defended us. Thank you so much today with getting the fees reduced you gave a great submission”. (2021)

“As a busy accountant I needed someone who would provide me with clear and concise and advice and be a strong advocate in court to fight my argument. Rebecca needed to win on 1 of the two arguments and excelled herself and won on both arguments and secured a Judgement for me with costs. Thank you Rebecca so much!” NT, Direct Access client, 2021-2022“Ms Keeves was very clear in her advice to me prior to the hearing and she put me at ease throughout the proceedings. I thoroughly enjoyed her cross examination of the claimant. I am confident that this hearing went in our favour based on her expertise. For that I am very grateful. I would like to again express my gratitude to Ms Keeves”. (2021)

“Rebecca exceeded my expectations from start to end regarding my hearing, she was attentive and maintained her professionalism throughout. I would highly recommend her for future civil hearings”.

“Rebecca has a very approachable manner and shows a thorough understanding of the case and the issues”.

“As a busy accountant I needed someone who would provide me with clear and concise and advice and be a strong advocate in court to fight my argument. Rebecca needed to win on 1 of the two arguments and excelled herself and won on both arguments and secured a Judgement for me with costs. Thank you Rebecca so much!” NT, Direct Access client, 2021-2022